Wow – I haven’t been here since the 15th April.  I’m sorry for my absence – I have had such a lot go on since that date!
My brother rang me just after lunch on the 15th April and said that Mum was unwell, had been to the doctor and was now on her way to the Mater with a heart rate of 160 bpm.  Now, my mum normally has a slow heartbeat, sitting about 50 bpm, so it was more than 3 times as fast!  The doctor said that she needed to have it sorted out, as it was in Atrial Fibrilation, and while that’s not necessarily dangerous (lots of people apparently walk around with it and don’t know they have it!!!) you can however have a stroke if there’s a blood clot etc., so that’s why they were so keen to get it fixed once they’d found the issue.
Mum spent 10 days in the Mater Private Coronary Care Unit and was discharged (bored) on Easter Sunday.  They gave her lots of drugs, and eventually stopped & restarted her heart in an attempt to get it back into the right beat.  Funnily enough, now it’s too slow!  So – standby for further updates, there may be a pacemaker needed but we won’t know more till they see how she reacts to the lowering of the drugs...
For Easter, some girlfriends and I went on a little road trip!  The delightful Michelle, Sue and I packed ourselves up and drove to Sydney.  We left Sue on the North Coast, and Michelle & I continued onto Millthorpe, where a friend of mine has an Antique store.  We stayed out there a night, and then came into Sydney to stay with some other friends, mainly so that I could go to the ANZAC Day dawn service with my RSL Sub Branch.  What a wonderful day – I was wrecked by the end of it though!!!
Michelle and I then drove back up the New England Highway to Glen Innes, where Ken was waiting for us, having driven down from home that day.  Glen Innes is the home of the Australian Standing Stones, and the annual Australian Celtic Festival.  Ken and I went to this for the first time last year, and had such a fun time that we decided we were going to go again.  This year, Ireland was the host nation (they take it in turns – very civilised!!!).
We stay at the showgrounds, and when we got there, the wind was blowing SO hard!!!  Our tent was on an interesting lean at times, but Ken is very diligent about making sure things are done properly, so there was never a danger that we were going to do a Dorothy and fly away!!!  We did wonder about Michelle’s tent from time to time though – did you know that a single dome tent can almost lay on its side & then pop up again when the wind stops?  No, nor did we!!! 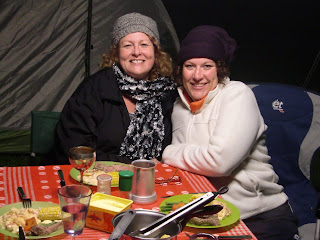 Roast lamb, potato bake & veggies done on the open fire...
We saw some great music – Paddy McGinley, Murphy’s Pigs (our very favourite), Highlander, Leaping Lizards etc.,  plus watched the parade, listened to lots of bagpipes & drums, ate and drank a little too well, and before we knew it, it was over! 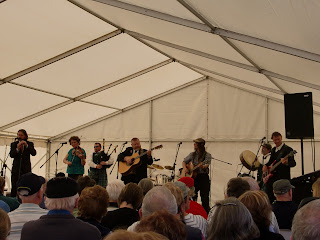 Piggies at play...
On Sunday we travelled up to our friends’ house at Stanthorpe for the night.  They are the owners of the Granite Belt Maze and mini golf.  They grew all of the conifers (which took 7 years) and designed and built everything themselves.  It was absolutely heartbreaking though to see the condition of the maze, and after this coming weekend, it won’t be there any more.  The conifers don’t like too much rain, and with all the rain that we experienced in Queensland in January, they have basically drowned and a lot of them have died.  You can’t replace them – as they take 7 years to grow, a maze with holes in it isn’t really a good maze....  So – they are very practical people, and they are ripping out all of the conifers and will be replacing them with a wooden maze.  They have incorporated lots of new ideas & innovations into it, and the puzzles and riddles will still be a key part of the overall experience.
It made me really start to think about things that are important.  Here’s a family who’s life was built around those conifers, that was their business, and it was taken away from them when it rained.  There’s no lamenting anything though – they’re just getting on with it, they have this weekend that they will be open, and then they’re closed until such time as they have a new maze.  They have a large chainsaw, an area prepped and ready to burn the conifers as they pull them out, they have a new plan of what they’re doing, and a very positive attitude.  I’m having a bit of a hard time fathoming how they’re managing to stay so positive, when they’re about to rip out such an achievement. 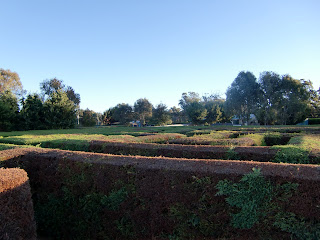 This photo really shows the problem.
Which got me thinking a bit more.
What would I do if I didn’t have to go to work?  And do I really want to go to work?  I basically go to work so that I can pay my mortgages, which are my savings for retirement.  I could ditch the investments, and go and live in a tent and not need money.  Would that make me happy?
I decided that the answer to that is no. I like my home, and while I also loved going camping for nearly a whole week, I don’t want to do it forever.  I like the fact that I’m working towards my retirement so that I will be able to do more of the things that I like doing and less of the things I don’t like doing.  Till then, I’m happy working.
I was pleased when I’d worked that through – that’s one area that I won’t have to declutter!!!  I don’t really want to have to declutter my job!  Or my properties!!!
I also went and had a look at my e-mails this morning and I have one there from my Dish Cloth swap buddy from the Down To Earth blog.  She’s in Canada – so exciting!  I need to go and get started on a couple of dishcloths now so that she can choose!!!
Hmmm – don’t have much else to say today, so had better get back to it.  Tonight I will be starting a list of things to do for the floor replacements, so that I can keep on top of it!!!
﻿
Posted by Sharynne at 12:46

Sharynne
I work full time in a Factory during the day... I had this vague idea a few years ago that I'd like to take 12 months out for just me and be self sufficient, you know - a bit of a hippy... then along came this job, and given it's location I decided that I could indulge my hippie wishes with going to work full time. I'm getting closer to my dream of the balanced life, and now's the right time for me to declutter my life from the "hangers on" - you know, stuff, people, habits, things. I live with my wonderful DP who supports and allows me to do anything, Spot and Stripe the wonder kittens, and 4 chooks. Oh, and the odd goanna, snake, bush turkey and kookaburra...

Topics I've managed to write about...

Links that inspire me!!