And now it's Monday again...

The time just flies by doesn't it?  No sooner is it Saturday, than it's then Monday.  We did have a lovely weekend - went all sorts of places on Saturday, some successfully, some not.  We didn't get the china cabinet - they didn't advertise truthfully and it had water damage and was NOT in fairly good condition... it'd been living in the shed for a couple of years, had water and structural damage, was filthy, and didn't have a Silky Oak top...  enough said!

Anyway, we got some carpet and laminate samples, and then invited the A family and the C family over to check them out and give us their opinions.  A couple of glasses of wine later and we had all made the same decision that Ken and I had made...  pale cream carpet, and either a Blackbutt or a Sydney Blue Gum floor.  We're waiting on the quote, and once that's received, I'll pick myself up off the floor, gulp a lot and find some money!!!

I've had a busy night tonight.  I've made Limoncello - so will see how that turns out in a few weeks.  I also made preserved lemons with the abundance that I have at the moment.  They were $2.99 for a kilogram so I have two kilograms, plus what was already hanging around at home, and then another neighbour came down this afternoon for some worm wee, brought me a lovely bunch of flowers, and also gave me some lemons.  I love where I live - the neighbours are all so friendly, we know lots of the people in the estate.  Every one of them are lovely - it's the kinda place where you leave your front door unlocked (when you're home!!!) and people come visit and just knock & come on in if the door's open!!! 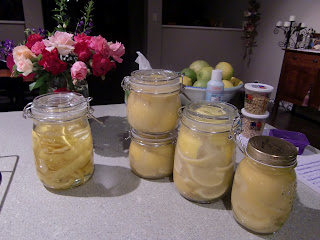 Here's the Limoncello on the left, and 2 large and 2 smaller jars of preserved lemons.... mmmm - Tagine's in winter will be coming right up!!!  Do you see the lovely bunch of flowers behind the jars?  That was my gift from Val!!! 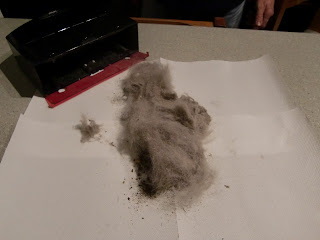 Roger's been really busy.  I put him on once every day, just in the Kitchen/Eating/Media room.  After about 5 days, look what he's picked up!!! 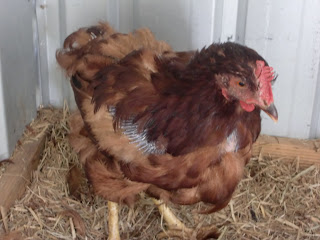 Did I tell you that one of our chooks was moulting?  God she looks just sooooooo awful!  I hope she hurries up and grows those feathers again - she's going to be chilly if the weather turns!!!
Decluttered a pile of jars tonight - I'm going to turf them into the recycle bin.  I know I need some, but really I had a whole shopping bag full, sure don't need that many!  Felt nice to be able to do that and get just something out of the house!  Also chucked into the bin a half eaten, half cut up woollen blanket.  Don't have space for stuff!!!﻿
Hope you are all well and happy - it's beddy bye time for this little duck right now!
Posted by Sharynne at 21:22

Sharynne
I work full time in a Factory during the day... I had this vague idea a few years ago that I'd like to take 12 months out for just me and be self sufficient, you know - a bit of a hippy... then along came this job, and given it's location I decided that I could indulge my hippie wishes with going to work full time. I'm getting closer to my dream of the balanced life, and now's the right time for me to declutter my life from the "hangers on" - you know, stuff, people, habits, things. I live with my wonderful DP who supports and allows me to do anything, Spot and Stripe the wonder kittens, and 4 chooks. Oh, and the odd goanna, snake, bush turkey and kookaburra...

Topics I've managed to write about...

Links that inspire me!!